Reformed Carnival in the Rhineland
Overview 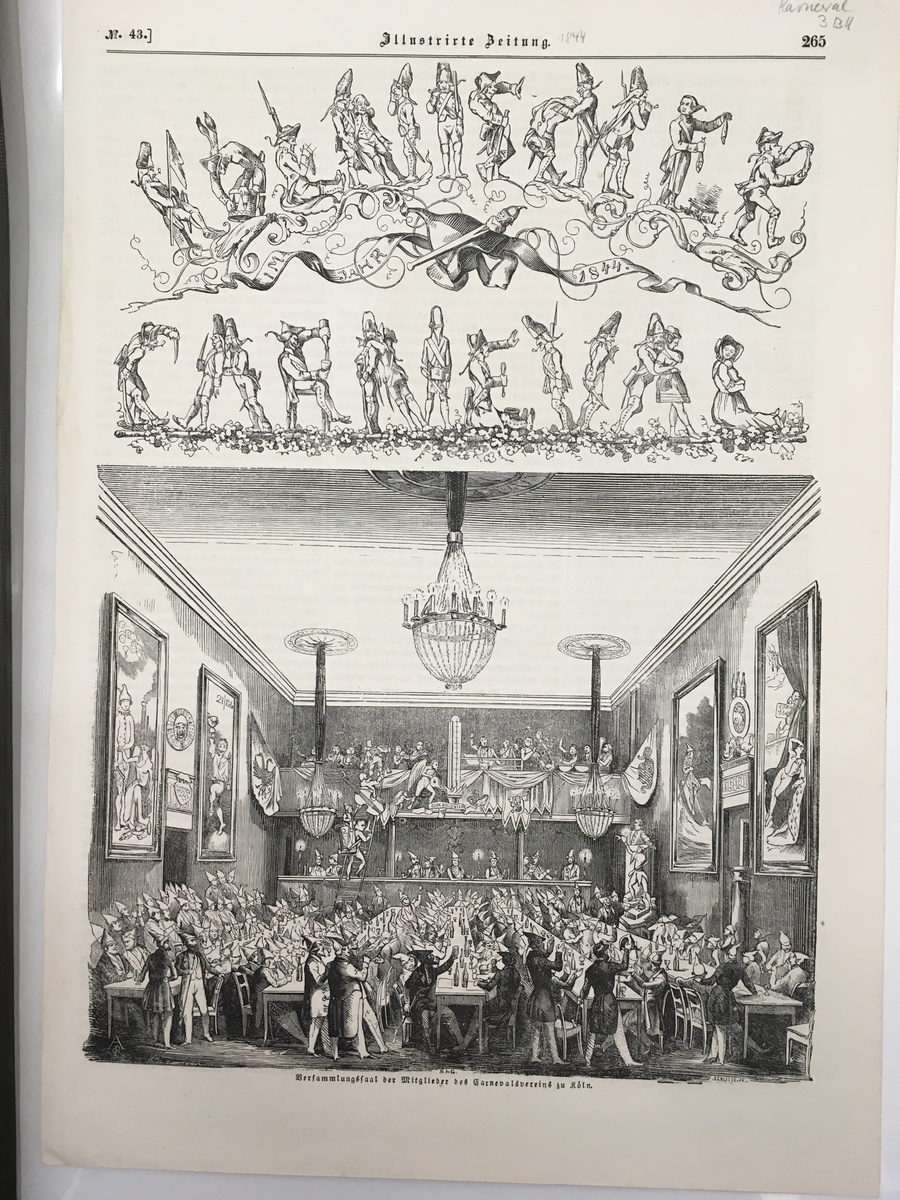 Carnival refers to the celebrations leading up to the beginning of the Christian lent period between Ash Wednesday and Easter. As a religious custom carnival has been celebrated for centuries from masked balls at courts to small street processions of the poor, always organised within and limited to specific societal levels or occupational groups. Lent requires abstinence from animal products and alcohol, among others, a sumptuous feast and celebration facilitates a farewell from meat, as one carnival etymology suggests (Carne vale). Other German terms for carnival are Fastnacht, Fastelovend and Fasching, which all refer to the last day or practices and food on the last day before lent starts.

The economic hardship and political frustration followed the Napoleonic Wars and the Congress of Vienna in the first two decades of the 1800s. Festive spirit in the middling sorts of the Rhineland was low, which had repercussions in form of aggressive behaviour towards Prussian soldiers, the new occupiers so to say, as well as dwindling financial support from the elites for local poor relief. By 1823 a group of manufacturers, merchants and politicians in Cologne had come together to revive carnival celebrations as a bourgeois, i.e. upper-middle class, organisational endeavour that would provide greater support for poor relief, bring the rising classes of Cologne together and provide carnival with a less shabby and dirty outlook than the lower sorts wandering around the streets wearing grotesque masks and making noise. By the 1840s this ‘reformed carnival’ spread across various regions of south-western Germany. Carnival remains, until today a characteristic part of cultural life in the Rhineland and Franconia. Different variations exist in other parts of Germany and German-speaking regions. This exhibition focusses on the reformed carnival, also called organised or Rhenish carnival, and its variations.

Influenced by Enlightenment clubs and associations extant in a few areas in Germany during the French Revolution, associative practices slowly gained momentum in the beginning of the nineteenth century and facilitated the establishment of a so-called public sphere in Germany. The public sphere refers to a space or spaces to discuss, debate and propose, in public, on matters of state, society, economy, science, art, literature among others. However, this necessitated freedom of speech as well as a free and open press. Most of German press was subject to censorship that prohibited outward criticism of government and monarchy, religion, civil rights and politics more generally. The Carlsbad Decree’s of 1819, which provided a catalogue for censorship in the entire German federation, even censored university teaching.

With this background, Rhenish carnival had to achieve two things, 1. reinvigorate religious festivities and rituals, 2. provide a space for discussion, criticism and practice of ideas that crossed to Germany especially German middling sorts over from France since the French Revolution. James M. Brophy refers to Rhenish carnival as ‘crypto-political’ ‘cultural formation’ that introduced to and familiarised Rhinelander with political issues, political practice by bridging ideas about ‘civic freedoms’ and ‘Romantic glorification of the past’ (Popular Culture and the Public Sphere in the Rhineland, 1800-1850, p. 213). We can witness two phases of carnival, a romantic bourgeois phase from 1824 to about 1830 and a political middling-sorts phase from 1840 to 1848. Studying this German festival highlights its significant contribution to protest culture and revolutionary practices in the early nineteenth century.