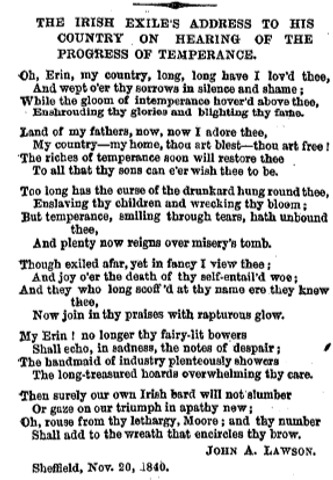 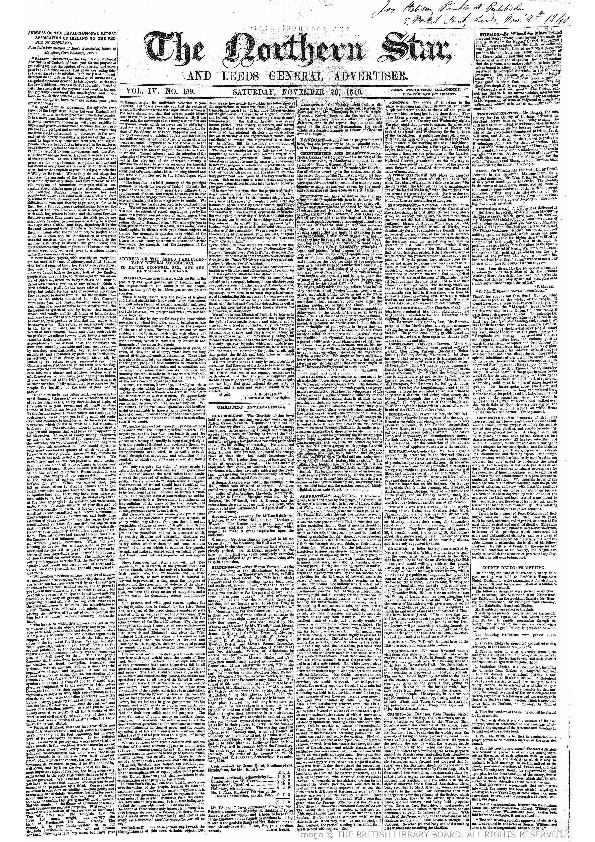 The Northern Star Newspaper was one of the most important focal points of the Chartist movement. It provided a forum through which many of its most prominent individuals could express their opinions and concerns and it commanded considerable authority among working class people across Britain who were grieved by rapid economic and social changes. It also provided a degree of continuity and unity to a movement that may otherwise have been merely a series of unconnected and intermittent bouts of popular discontent.

The Northern Star was founded by Feargus O’Connor alongside printer and publisher Josiah Hobson, with its first edition being printed on 18 November 1837. It was named in honour of the newspaper of The Society of the United Irishmen who were involved in the Irish rebellion of 1798, and who O’Connor’s family had supported at the time. He saw it as providing a mouthpiece to voice the concerns of the working classes and campaign for radical political and social reform. However, many writers, both during the period and subsequent historians, have criticised O’Connor for using the Newspaper to impose his personal ascendency upon Chartism, establish a quasi-cult of personality, and sidelining other voices which dissented from his own. Indeed, the great Irish campaigner for Catholic Emancipation, Daniel O’Connell, commented in 1842 that, 'Upon my word, this paper of Feargus's is a literary curiosity… What a notion of the fellow to set up a newspaper praising himself!' Moreover, some saw it as excessively populist by too readily engaging in demagoguery and pandering to the prejudices of its readers, with fellow prominent chartist Francis Place complaining that it degraded the whole tone of the Radical Press.

Notwithstanding these criticisms, The Northern Star experienced an unprecedented level of success for a radical newspaper. Following the publication of the People’s Charter in 1838 its popularity exploded. In April 1839 it enjoyed a weekly circulation of over 60,000 and a much larger number of readers – a fact unthinkable anywhere else in Europe! It continued to provide commentary, debate and news on the Chartist movement, and radical politics more generally, throughout the 1840s. However, its popularity declined alongside the fortunes of Chartism. With a weekly circulation of only 1,200 by the end of 1851, O’Connor sold the paper to George Julian Harney in April 1852. Harney merged it with The Friend of the People to form The Star of Freedom.

Although Feargus O’Connor was personally sceptical of the ‘New Move’ in 1840, believing that it unnecessarily divided the movement when many Chartists began to promote self-help and moral improvement, The Northern Star was willing to publish articles – many of which were written by its working-class readers - promoting such ideas. This can be seen in John A. Lawson’s poem called ‘The Irish Exile’s address to his Country on hearing of the progress of Temperance.’ While another extract entitled ‘The Sin of Drunkenness’ describes the corrupting influence of alcohol on individuals. Both these pieces were published in The Northern Star on 28 November 1840, the same date as the publication of the 'Teetotal Pledge', which encouraged Chartists to abstain from alcohol.